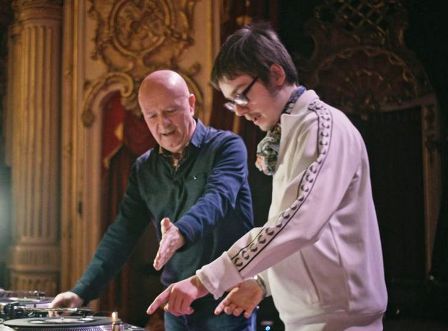 Tonight (Wednesday 27th May) the BBC (UK) TV series. ‘Our Lives’ tells the story of Anthony Flavin – a young man who has spent most of his life growing up in care. Life was hard for him for a good while, but, he says, his discovery of Northern Soul turned his life around… hence the programme’s title … ‘SOUL BOY’.

Anthony had been in care since he was six and often presented his carers with challenging behaviours. As a young teenager he saw the Steve McQueen movie ‘Bulllit’ and began to explore 60s culture – eventually focusing on music – more specifically Northern Soul. His key social worker, Luke Greenhill, helped fuel this new passion by taking him to Northern Soul nights and helping him find records. Luke says this helped Anthony to find a sense of community and belonging for the first time and there was a marked change in his behaviour.

The documentary follows Anthony’s Northern Soul odyssey culminating with him spinning records on the famed Blackpool decks on his 18th birthday where he is mentored by Richard Searling (pictured with Anthony, above)

Soul Boy will be broadcast on BBC One at 19:30 BST on 27 May. Presumably it will be available via the BBC I-player later.