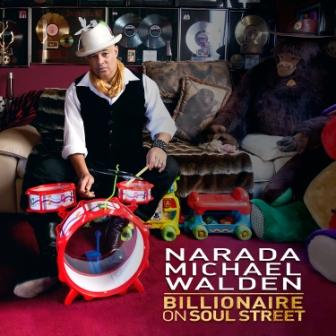 We don’t have actual access to his bank records but on his latest release, the effervescent NARADA MICHAEL WALDEN would have us believe that he’s a ‘Billionaire On Soul Street’.

Released on Tarpan Records (Narada’s own label), the upbeat, feel-good tune is the lead single from our man’s upcoming ‘Evolution’ long player which is set for release on October 23rd.

Narada Michael Walden needs no real introduction here: but to summarize… he’s produced countless big, big names including: Aretha Franklin, Steve Winwood, Ray Charles, Whitney Houston, George Michael, Mariah Carey, Barbara Streisand, Lionel Ritchie, Elton John, Sting, Carlos Santana, Shanice Wilson, Tevin Campbell, Lisa Fischer, Stevie Wonder, Tom Jones, Jeff Beck and The Temptations. He was awarded Grammys for Producer of the Year in 1988, Album of the Year for the movie soundtrack ‘The Bodyguard’ in 1993 and the R&B Song of the Year in 1985 for Aretha Franklin’s ‘Freeway of Love’. Billboard Magazine also named him one of the “Top Ten Producers with the Most Number One Hits”.

Narada is also a top artist in his own right. Beginning as a drummer with the pioneering Mahavishnu Orchestra (replacing Billy Cobham at 19 years old), Narada also toured with Jeff Beck, Tommy Bolin, and Weather Report before setting off on his own trajectory. He’s now recorded twelve solo sets and performed in the world’s top concert halls… most famously at the wonderful 2012 White House Show with B.B. King, Buddy Guy, Mick Jagger, Trombone Shorty and Booker T Jones.