SOUL AT ANY PRICE! 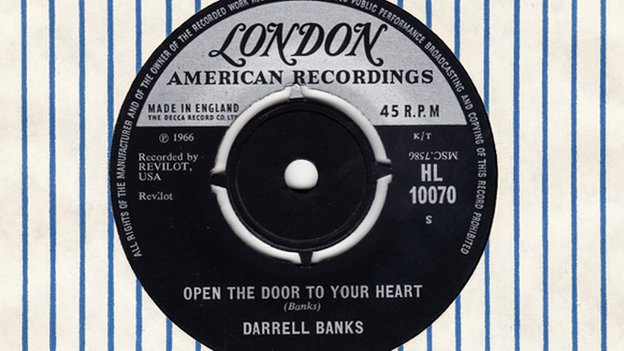 Just before Christmas we ran a story about an on-line auction for an UK soul 45. Record in question was DARRELL BANKS’ magnificent ‘Open The Door To Your Heart’ – a tune known and loved by all proper soul fans. What made this particular record so rare was that it was a pressing on the UK London label.

Only a very few were ever pressed up on London and when EMI won the licensing rights, it was thought that all the copies were destroyed. Not so! It seems one shrewd Decca employ (the owners of the London label) kept one copy and this mint waxing was put up for auction at year end.

We’re told that the web site hosting the sale crashed with the volume of bids but eventually it was sold for £14,543 to a bidder known only as “dalerivers”. Dealer, John Manship who ran the auction simply said the new owner was from the UK but not particularly known to him. Rumours have been circulating in the Northern Soul scene that a lottery winner from Haverhill, Adrian Bayford and snooker legend Steve Davis, both serious soul collectors, were bidding for the 1966 rarity.

Still on a Northern soul tack…. Soul fans who watch University Challenge fell out of their seats this week with a round on the magical genre. For their starter contestants had to identify the above mentioned ‘Do I Love You (Indeed I Do) as a piece of “Northern Soul”, then go on to indentify singers Dusty Springfield, Gladys Knight and Gloria Jones singing Northern classics.  What is BBC 2 coming to!