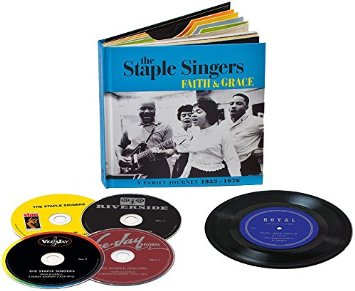 Just in time for Christmas, December sees the UMC release of the the first-ever comprehensive, career-spanning overview of THE STAPLE SINGERS.

Entitled ‘FAITH AND GRACE: A FAMILY JOURNEY 1953-1976’, the limited edition box set will include 4 CDs plus a remarkable bonus – a 7″ vinyl pressing of the earliest known recording of the family outfit… the first time the tracks (‘Faith And Grace’ and ‘These Are They’) have been available in any format since the initial self-released issue way, way back in 1953. The two songs were originally released on either side of a 78 and were made in Pops Staples’ Chicago basement and only 500 copies were ever pressed up!

The box comes housed in “a deluxe, old-school 45-folio” package and the accompanying book features new liner notes by Mavis Staples, James Miller, Opal Louis Nations and compilation producer Joe McEwen, as well as rarely seen photos of the family band taken over the course of their career.