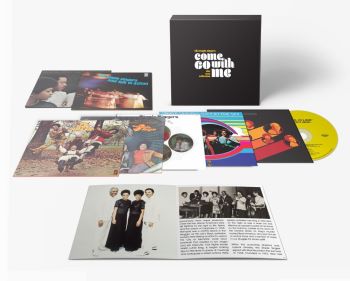 Earlier this year CRAFT RECORDINGS began an ambitious reissue programme of material from the STAX imprint GOSPEL TRUTH. They promised the first-ever digital release of 25 albums from the label’s catalogue and began with classic albums from the mighty Rance Allen Group.

Now Craft Recordings have announced the release of a deluxe CD edition of ‘Come Go With Me’ – a box set of the best of the STAPLES SINGERS’ Stax output. Collectors will know that it was previously available only on vinyl.

The box offers all the family group’s studio albums alongside a plethora of rarities, non-album singles and live recordings from the legendary 1972 Wattstax music festival. There are 7 CDs in the set which also includes a booklet with archival photos and liner notes from American music specialist and curator Levon Williams and folklorist, ethnomusicologist and writer Langston Wilkins.

Simultaneously, Craft Recordings continue their careful curatorship of the Gospel Truth label with ‘The Gospel Truth – The Complete Singles Collection’ which brings together the 17 singles (A and B sides) that the label issued between 1972 and 1974. It comes in a vinyl edition (three LPs) and in a 2 CD set. Purchasing this set from Stax’s online store can unlock some interesting bonuses…. T shirts and other gifts (while stocks last).