SOUL AND FUNK ON VINYL – NEW REISSUES FROM THE DEMON LABEL 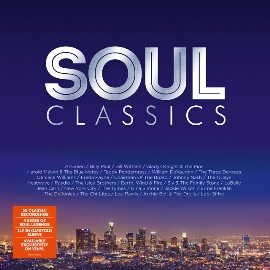 From its inception in 1980, the UK-based Demon label, along with its Edsel imprint, has been serving up noteworthy soul music reissues. With the resurgence in the popularity of vinyl LPs, the London-located company has just issued a varied batch of albums  – including compilations – on 180 gm vinyl.

First out of the blocks is ‘Soul Classics,’ a  30-track double LP that is likely to attract a wide demographic with its devotion to some of the soul genre’s most anthemic tunes from the 1970s.The sound of Philadelphia is represented by songs by the O’Jays (‘Brandy’), Billy Paul (‘Me & Mrs Jones’),  Harold Melvin & The Blue Notes (‘If You Don’t Know Me By Now’), The Three Degrees (‘When Will I See You Again,’ Teddy Pendergrass (‘The Whole Town’s Laughing At Us’), and Jean Carn (‘Was That All It Was’).  There are also classic sides by Al Green, Gladys Knight & The Pips, Bill Withers, Earth, Wind & Fire, Isley Brothers, Freda Payne and Deniece Williams. You’ll also find a sprinkling of 60s tracks from Nina Simone, Jackie Wilson, and Erma Franklin.

Another new Demon compilation making its appearance on LP is  ‘Greatest Hits’ by the legendary Average White Band, which features some of the Scottish funk/soul group’s biggest smashes: ‘Pick Up The Pieces,’ ‘Cut The Cake,’ ‘Work To Do,’ and ‘Let’s Go Round Again.’ The album’s pressed up on white vinyl.

For those who like to their soul music to be a bit more esoteric, then the gritty funk found on the self-titled album by The Politicians Featuring McKinley Jackson, originally released on Holland-Dozier-Holland’s Hot Wax imprint in 1972, just might fit the bill.  It features the cinematic instrumental ‘Free Your Mind’ as sampled by DJ Shadow for his 1991 cut, ‘Lesson 4.’

If you want to dig deeper in into H-D-H’s Hot Wax/Invictus catalogue then another Demon retrospective, ‘The World We Live In,’  is recommended. Like ‘Soul Classics,’ it’s a double set and among its many highlights are ‘Crumbs Off The Table,’ by  Laura Lee ‘Why Can’t We Be Lovers,’ by Holland-Dozier Featuring Lamont Dozier, ‘Wants Ads’ by Honey Cone, ‘The Unhooked Generation’ by Freda Payne, ‘Love Factory’ by Eloise Laws and ‘Working On Building A Love’ by Chairmen Of The Board. There also cuts by Lee Charles, Just Brothers, Harrison Kennedy and several others.

Also featured on ‘The World We Live In’ is George Clinton’s groundbreaking aggregation, Parliament, whose mind-blowing debut album, ‘Osmium’ – famously sampled by the likes of De La Soul, NWA and DJ Shadow – was released on Invictus in 1970. A collision of psychedelic rock,  lysergic soul, gritty funk, deep blues and even country music (check out ‘Little Ole Country Boy’ complete with lap steel guitar), ‘Osmium’ is a sprawling collection of tunes unified by Clinton’s genius.

More Demon LP releases come in the shape of  ‘Wack Wack,’ recorded in 1966 for the Brunswick label, by Chicago jazz group, The Young-Holt Trio; ‘Trax – The Foundations Of House,’ a various artists compilation which spotlights the rise of Chicago’s house music scene; and  ‘Straight Out Of The Jungle,’ the 1988 debut from the pioneering hip-hop group, The Jungle Brothers.

All Albums Are Out Now Via Demon Records