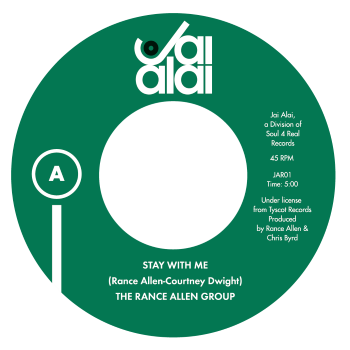 Reissue specialist label SOUL 4 REAL have just launched a subsidiary imprint … JAI ALAI (pronounced Hi-Uh-Li) and the first two releases are stupendous . They feature the RANCE ALLEN GROUP and URSULA RICKS… soul for real, for sure! So why the name change!!!

The Rance Allen release pairs two sides the Reverend cut for Tyscot Records in 2002. Collectors will know that for years before, Allen and his brothers were mainstays at Stax’s Gospel Truth label. Then after stints with Myrrh and Bellmark they ended up at Tyscot where their CD only album ‘All The Way’ redefined contemporary gospel. And it’s two tracks from that Tyscot album that make up Jai Alai’s first 7”.

The A side is the wonderful ‘Stay With Me’ which, since original release, has remained a classic and in-demand. No wonder… if it doesn’t give you goose bumps, nothing will! It’s simply wonderful. The single’s B side is the more traditional ‘Living Witness’ – another fine example of Allen’s remarkable stentorian power and vocal gymnastics!

The Ursula Ricks single pairs two tracks from the Baltimore singer’s CD only album ‘My Street’.  They are ‘Sweet Tenderness’ and ‘Make Me Blue’. The former, a remix of the original album track, is a delightful a string-laden stepper that has immediate appeal. The latter is another remarkable piece of work – in many way similar to the Sounds Of Blackness in their Jam and Lewis period . The USP  of both these cuts is Ms Ricks’ unique voice  -a remarkable instrument that  betrays the lady’s blues and gospel roots!

So Jai Alai launches in fabulous fashion and we’re told the label will concentrate to on releasing more 21st century gems like these on to 7” vinyl. Bring ’em on!