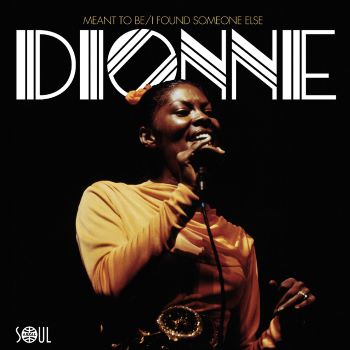 First up there’s two rare cuts on DIONNE WARWICK…. ‘Meant To Be’ and ‘I Found Someone’. Both tunes come from Ms W’s time at Warners and it’s the first time both songs have appeared on vinyl. Despite what the soul histories say, Dionne’s time at Warner’s was hugely productive  and she released a plethora of quality music. In the mainstream, of course, she’s revered for her work with Bacharach and David, but connoisseurs revere her time at Warners when she worked with top writers/producers like H-D-H, Thom Bell and Jerry Ragovoy. And it’s Ragovoy’s who’s at the helm for the putative A side of the Soul 4 Real release, ‘Meant To Be’. It’s a lovely piece of work – so typical of Dionne’s special mid 70s work – things like ‘Track Of The Cat’ and ‘Then Came You’. The B side (every bit as good as the A) is down to Thom Bell and ‘I Found Someone’ is a typical Thom Bell song and production and we can’t give higher recommendation that that. It’s quite lovely and it begs the question as to why  (like ‘Meant To Be’) it lay in the vault till it appeared on a 2013 CD compilation. Now thanks to Soul 4 Real we can enjoy ‘em both on vinyl!

The second new Soul 4 Real 45 offers a very different soul flavour. If Dionne Warwick represented the lighter, more urbane side of soul, then “the soul Queen of New Orleans”, IRMA THOMAS represents the grittier, tougher, more down home side of soul. Her Soul 4 Real disc pairs ‘All I  Wanna Do Is Save You’ with ‘Turn Around And Love You’. The former, produced down in Jackson at the Malaco Studios by Wardell Quezergue, is a proper tortuous and deep soul Southern soul builder; the latter is a touch lighter (it was recorded in Detroit with Joe Hinton) but it’s none the less properly soulful. Both tracks date from the early 70s and it’s their first time on vinyl.