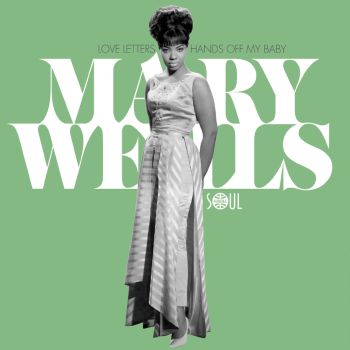 Mary Wells is rightly known and respected  for her work at Motown. Indeed her success at Motown was a real kick starter for the fledgling Gordy Empire. But if we’re to believe what we read, Mary wasn’t really a team player and wanted a bigger share of the revenues her hits were bringing to Hitsville. In those early days Berry Gordy wasn’t one to tolerate dissent and Mary duly left the fold. She first signed to 20th Century Fox before moving to Atlantic subsidiary Atco where she was placed in the capable production hand of Gerald Sims and Carl Davis. The team’s biggest success was the lovely, lilting ‘Dear Lover’ but Ms Wells cut plenty more classy soul at Atco and Soul 4 Real oblige by pairing two of those tasty cuts on 7” – ‘Love Letters’ and ‘Hands Off My Baby’.

Both  are real rarities and though they’ve appeared on various CD compilations and retrospectives , this is the first  time that they have appeared on vinyl and how delightful they sound. ‘Love Letters’ (not the Ketty Lester song, by the way) is a sweet, gentle, lilting tune perfectly suited to Mary’s delicate delivery while Carl Davis’s production is a  template for classic Uptown soul. ‘Hands Off My Baby’ is another quality production with just a flavour of Mary’s Motown hits like ‘Two Lovers’. The writers by the way are Popcorn Wylie and Tony Hester, so there’s  the obvious Detroit link!

Texas’ Barbara Lynn (born Barbara Lynn Ozen) proffered a different kind of soul sound to Mary Wells – more earthy, more “for real”, but she’s just as revered by true soul collectors who’ll be delighted with this new Soul 4 Real single, pairing, as it does, ‘Unloved, Unwanted Me’ with ‘Soul Deep’. Both sides were recorded in 1968 at American Studios in Memphis under the auspices of Spooner Oldham. ‘Unloved, Unwanted Me’ is a sombre affair, mournful even with a soulfully yearning vocal from Ms Lynn. No writing credits were found but the production is classic Memphis. ‘Soul Deep’ is a well-known song… a hit indeed for the Box Tops, but, written by, Wayne Carson, Barbara’s version  is thought to be the song’s first recording.  As with the Mary Wells’ tunes, both these songs have appeared on various CD collections, but this is their first outing on vinyl. Find out more @ https://www.soul4real.es/soul-4-real-records/