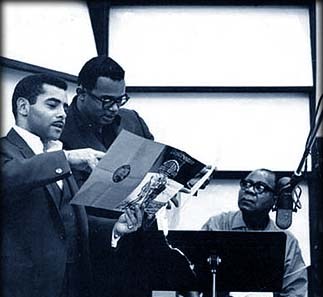 Though details are sketchy, US new reports have confirmed the death this week of famed soul arranger/writer/producer SONNY SANDERS (pictured (left) with Carl Davis and Louis Armstrong in 1968). Sanders was 77 and will probably be best remembered for his work in the 60s and 70s for the Chicago-based Brunswick label.

Born William Sanders in Detroit on August 6, 1939, “Sonny” Sanders sang with a number of groups; the most famous being the early Motown outfit, the Satintones. He soon moved into arranging and production, working at Correc-tone with Gino Washington and Danny Woods and then founding his own SonBert label with Robert Bateman. He then moved to Golden World working with people like Edwin Starr (‘Agent O-O Soul’) and the Reflections (‘Just Like Romeo And Juliet’). Over at Motown he worked with Mary Wells and Barrett Strong.

In 1965 Sonny was tempted to move to Chicago by Carl Davis who offered him work with Okeh and later Brunswick. Amongst his first projects in Chicago was rekindling his working relationship with Mary Wells; he arranged her biggest post Motown hit ‘Dear Lover’. While at Okeh, Sonny worked with Otis Leavill, Billy Butler, Gerald Sims, and Willie Henderson, among others.

In 1966 Carl Davis moved over to Brunswick and Sanders went with him. Their first major project was re-vitalising the career of Jackie Wilson with the timeless ‘Whispers’. Sanders worked with Wilson on numerous other tracks and ironically the musicians he used for the cuts were his old Detroit associates, The Funk Brothers who were moonlighting anonymously from the Gordy snakepit. Sanders went on to work with the major Brunswick artists … people like Gene Chandler, Tyrone Davis, Barbara Acklin, the Chi-Lites, the Artistics and Walter Jackson. Sanders also wrote prolifically. Amongst his best known tunes are ‘Soulful Strut’/’Am I The Same Girl’ and ‘With This Ring’ which became a hit for the Platters.

Sonny Sanders later worked with Chubby and the Turnpikes (who, of course, became Tavares) and Manchild (Babyface’s first band). In 1998, Sanders co-arranged and co-produced Eugene Record’s first gospel album, ‘Let Him In’, for Record’s own Evergreen label.

In more recent years Sonny’s health was poor though he continued to work, chiefly in Gospel and he ran his own publishing company, ‘Joy Over One’.