SOMETHING OLD…. SOMETHING NEW…. 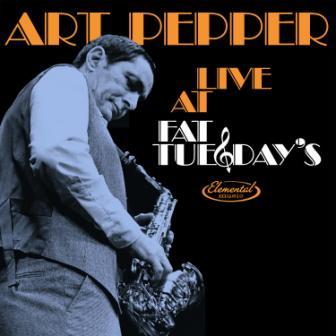 Last month saw the release of a couple of interesting jazz albums which collectors might be unaware of.

First up there’s a previously unissued live album from saxophonist ART PEPPER. ‘Art Pepper… Live At Fat Tuesday’s’ was recorded at the New York club on April 15th 1981 and features leader Pepper supported by pianist Milcho Leviev, bassist George Mraz and drummer Al Foster. The performance (just a year before Pepper’s death) comes from a fertile period in the sax man’s career when he was working to overcome his drug dependency after stints in jail for narcotics violations.

The album is released on Elemental Music and the five extended tracks include two Pepper originals and versions of Thelonius Monks’ ‘Rhythm-A-Ning’, Cole Porter’s ‘What Is This Thing Called Love’ and Benny Goodman’s Gordon Jenkins–penned ‘Goodbye’.

Brand new (well mostly brand new) is ART “TURK” BURTON’S ‘Spirits; Then And Now’. Burton is a Chicago-based jazz percussionist and we’re told that his album (on which he’s supported by Congo Square) “draws on the rich and diverse spectrum of the African-spawned musical traditions that define Black American music”.

The album’s two opening cuts were recorded live back in July 1983 at Rick’s Cafe American in Chicago with the first tune being Burton’s tribute to legendary percussionist Chucho Valdes. The set’s remaining six studio tracks were recorded in 2015 and include versions of Mongo Santamaria’s ‘Afro Blue’ and Coltrane’s ‘A Love Supreme’.

ART “TURK” BURTON; SPIRITS; THEN AND NOW was released on October 2nd.