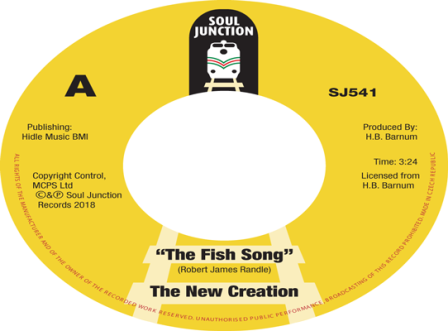 The title ‘The Fish Song’ might not suggest a super soul cut – rather a jingle or commercial for a fish shop or fast food outlet and sadly that’s what record company execs and radio jocks thought when five piece ensemble THE NEW CREATION tried to get promotion and airplay for their 1974 cut of that name! Sadly despite optimistically pressing up 2000 copies, the record meant little but, as is often the way, the song eventually became a cult item on the rare groove circuit in the UK and Europe and those 2000 records started to fetch big, big bucks.

To satisfy collectors’ demands, UK niche label SOUL JUNCTION have released ‘The Fish Song’ as their first 7″ vinyl single of 2019 and like all Soul Junction output, it’s sure to sell out fast ‘cos ‘The Fish Song’ is a sweet and soulful harmony delight. Busy and brassy, in places it mind remind you of the Esquires and, yes, it is quirky but that only adds to its charms. For the B side, Soul Junction have chosen ‘Elijah Knows’ – a song about the group’s allegiance to the Nation Of Islam – but it’s not heavy or didactic – just another pleasing harmony outing. By the way, if you need a guarantee of quality we’ll just say that production on both tracks is by H B Barnum!

For the anoraks, the New Creation were Robert James Randle, his son- Keith Randle, cousin Mel Houston, his step father William Cooper and the enigmatically named Wayne E-2X. For sure, their career was brief – but ‘The Fish Song’ is a mini harmony treasure.