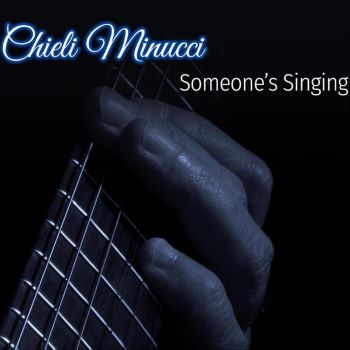 Garlanded American guitarist, CHIELI MINUCCI has just released an intriguing solo album… ‘Someone’s Singing’ . The 12 tracker is an LP that we can add to the growing list of what we can call ‘Lockdown Albums’. You see, back in March 2020 Minucci was set to go on tour with his band Special EFX to promote their album, ‘All Stars’. But, of course, we all know what happened.

Seeking some peace and reassurance amidst the Covid uncertainty, he focused on what he knew he did best – make music… a different kind of music, though. In times of crisis and uncertainty, we often look back to a perceived “golden age” – a time when things were simpler and life was somehow more enjoyable. Minucci harked back to his late teenage years when  he frequented and enjoyed the folk and classical guitar-based music then popular in Greenwich Village’s coffee shops and eclectic bars. Those cherished recollections inspired him  to write and record his first acoustic guitar-based album – so yes, his ‘Someone’s Singing’ is different (for him!).

Minucci wrote ten of the 12 tunes and recorded most of them in the security of his New York home studio, crafting a soundscape that is heartfelt and meditative – sombre even – reflecting the times in which it was recorded. To create the mood, ‘Someone’s Singing’ is largely a solo set, though a fretless bass adds structure to two tracks – ‘New Faith’ and the brief ‘Your Spirit’ while the late George Jinda (Chieli’s partner in Special EFX) adds his percussion to one of the album’s key cuts , ‘Free Again’ which is further enhanced by strings arranged by Steve Skinner. Most poignant track is the moving ‘Memories Of Mother’ – which (obviously) is dedicated to Minucci’s role model mother Catherine. Everyone, I’m sure, will be able to empathise with the tune’s emotion.

And the odd album title – odd for an instrumental set, that is? Well, that  title ‘Someone’s Singing’ is part of line from  the traditional ‘Kumbaya’ song – a variation of which opens the album.