SOME KIND OF WONDERFUL! 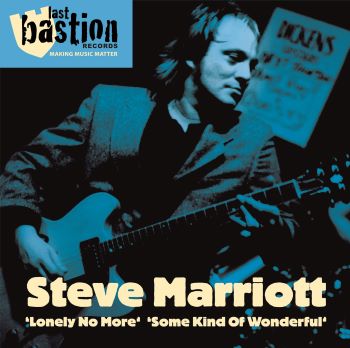 All serious music collectors know that STEVE MARRIOTT (yes, he of the Small Faces!) was a soul boy at heart. He and Faces colleague Ronnie Lane  shared a real passion for soul and though the band specialised in mod-oriented pop, there was always a blue-eyed soulful undertow and it’s well known that the duo perceived themselves as the East End’s answer to Booker T and the MGs – witness some of the Small Faces’ B sides. Indeed at one time Marriott planned setting up his own soul revue to which end he recruited ex Raelettes/Ikettes Venetta Fields, Sherlie Matthews and Clydie King to join the circus! It never quite took off but Steve remained a soul fan offering his special take on the genre right up to his tragic death in 1991.

Proof for that assertion? Well try a new, upcoming single from LAST BASTION RECORDS which pairs two previously unreleased Marriott tracks on lovely 7” vinyl. The A side is a 1981 recording, ‘Lonely No More’. Written by Steve, on it he lines up with his old mate Ronnie Lane. Indeed, it’s the very last song that the pair worked on together. ‘Lonely No More’ is a feisty, Hammond-led Southern soul groove with that  distinctive Steve Marriott vocal. It was slated for a release but the record company pulled the plug when they realised that Ronnie Lane (then seriously ill with MS) wouldn’t be able to go out to promote it. Now thanks to Last Bastion, we can all enjoy it!

The disc’s putative B side is probably the one that will really interest the soul collectors… it’s Steve’s cover of the wonderful Soul Brothers Six anthem, ‘Some Kind Of Wonderful’. For reasons still unexplained, it was never released but it’s a blistering version. Steve and his band don’t stray too far from the original – it’s tough and gritty with a convincing, fiery vocal, Amongst the backing singers, by the way, is PP Arnold!

Steve Marriott expert, John Hellier (Author ‘Steve Marriott  All Too Beautiful’ , Small Faces fanzine curator, Head Honcho @ Wapping Wharf Records) claims “Steve’s new material is in a class of its own, one track had the hallmark of a hit for Steve or indeed anybody else, lend an ear to LONELY NO MORE and dare to disagree; while some will say ‘SOME KIND OF WONDERFUL, the (Soul Brothers Six) American original is the best ? Well Steve’s rendition is surely the exception to this rule ?”

See  how right Mr Hellier is when ‘LONELY NO MORE’/’SOME KIND OF WONDERFUL’ wins release on Last Bastion Records in a limited edition of 300 in January. It’s available to pre-order @ http://shop.detourrecords.co.uk/epages/es785745.mobile/en_GB/?ObjectPath=/Shops/es785745/Products/LB02&Locale=en_GB