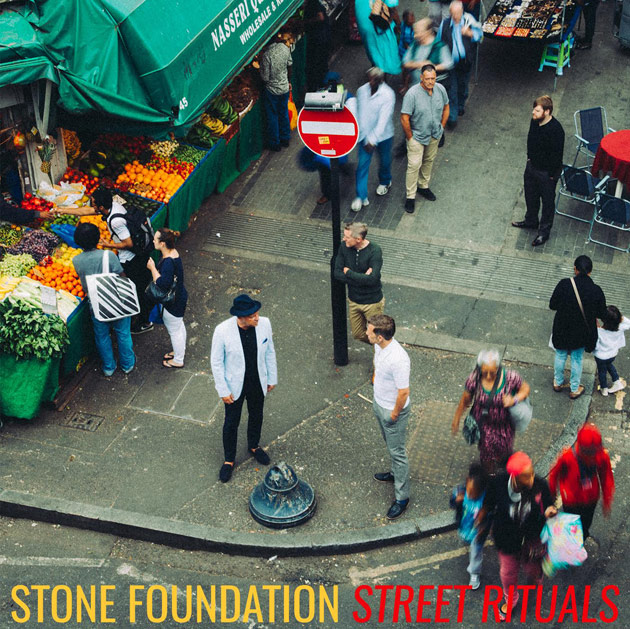 STONE FOUNDATION are a hard-working UK soul band created by Neil Sheasby and Neil Jones who shared a mutual love for all things soulful and like the rest of the team they put together they knew that the real route to success was live work… not the yellow brick road of the TV talent show. So, the Stones gigged consistently round the London circuit and in 2011 the effort paid off when they were invited to open for the Specials on their comeback UK arena tour.

Several long players later the band have built a solid fan base that’s set to grow as they prepare to release a brand new album, ‘Street Rituals’. There’s a real buzz about the new album as it’s revealed that the set is being produced by self-confessed soul boy, Paul Weller. That special buzz has been heighted by the just-released single, ‘Strange People’, which features a cameo vocal from a certain William Bell.

The Stax stalwart says: “It was an absolute pleasure working on “Strange People” with Stone Foundation and Paul Weller for the band’s brand new album!”

The Foundation’s Neil Jones adds: “‘Strange People’ was written from the viewpoint of a child growing up in today’s society, surrounded by a changing city and an uncertain future. Children never have any preconceptions of race, religion or creed. That’s imprinted on their minds by the strange people surrounding them struggling to survive within a society divided by media driven stories and political lies”.

The soundscape of the single adds to the urgency of that message. There are hints of classic 60s soul, a garnish of that special Paul Weller sound, even a feel of the great Steely Dan. It all bodes well for the album.

That Stone Foundation’s album ‘Street Rituals’ is released on 31st March via 100% Records… the same day that the band support Paul Weller at his Teenage Cancer Trust headline show at London’s Royal Albert Hall. From there, the group go on an 8 gig UK tour… dates below.

The single ‘Strange People’ featuring William Bell is out now and you can catch the video @ www.youtube.com/watch?v=IVctu0hNzdY

Fri 05 May Coventry, The Empire

Fri 12 May Leeds, The Wardrobe

Thu 18 May Newcastle, The Cluny