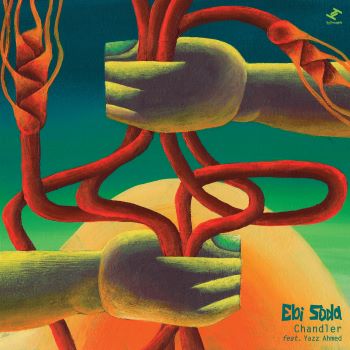 EBI SODA are a Brighton-based nu-jazz quintet. They describe themselves as “staunch anti-traditionalists, thriving on the idea of contradiction and seeming more inspired by the atmosphere inside a rave than the sounds heard inside a jazz club with their only debt to typical jazz being to attempt to innovate and experiment at every opportunity.”

Hear what “anti-traditionalist” jazz sounds like via the band’s latest single ‘Chandler’ – a shifty, moody, chiller with guest input from acclaimed British-Bahraini trumpet and flugelhorn player Yazz Ahmed. Her haunting horn solo adds texture to the tune which sets out to blur the lines between jazz and electronic sound design. One commentator has described the tune as “psychedelic Arabic jazz” and the accompanying artwork (above) adds weight to that assertion.

Check the  accuracy of that via your own investigation. Ebi Soda’s ‘Chandler’ is out now through Tru Thoughts. The cut is from the group’s upcoming album ‘Honk If You’re Sad’, released April 29th