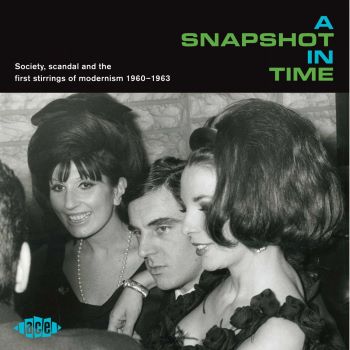 For our younger readers the “snapshots” in our title (above) means photographs. In the days before digital cameras and smart phones, people used real film and took “snaps” at opportune moments – usually on holiday or at special events like parties, weddings etc to capture a special moment.  Rarely did they take “snaps” every time a waiter/waitress put a plate of food in front of them or at any other odd time. You see the number of pics you could take with your film was strictly limited and you had to pay to have them processed into pictures, and that usually took a couple of weeks. Nothing was instant. The good old days!

That tortuous preamble brings us to a wonderful new compilation from ever-dependable Ace Records. It’s called ‘A SNAPSHOT IN TIME’ – so you can see where we were coming from in the introduction. The 24 track collection  sets out to offer a picture, a “snapshot” if you would, of a magical era in British popular music… the first few years of the sixties, just before four lads from a Northern seaport “shook the world”.

Contrary to what many think and as this collection proves, there was a thriving and varied pop music culture in the UK pre-Fabs. For sure people like good old Cliff, Adam Faith, Marty Wilde, Joe Brown were aping   their US rock idols while singers like Matt Monroe, Dickie Valentine, Ronnie Carroll and others worked hard to preserve the crooner tradition. But there was also an awful lot going on that was intriguing and interesting and just a little off the mainstream.

So a  coterie of enthusiasts were offering their take on R&B and early soul and here you can enjoy people like Jimmy Powell, Manfred Mann, Chris Farlowe and  Georgie Fame’s Blue Flames (pictured) offering their lively  takes on the genres. The album also has plenty of names who stove to keep the blues alive – Cyril Davis, Duffy Power and  of course “big Blues Daddy”, Alexis Korner and Ottilie Patterson whose cut here is a loose version of ‘Baby Please Don’t Go’ which features no less than Sonny Boy Williamson on mouth harp!

So yes, pre-Beatles, aside from the poppier stuff, there was an intriguing, exciting Brit music scene out there, from which even the Beatles profited. England was swinging years before the phrase was coined! Here’s the proof!