SISTERS DOING IT FOR THEMSELVES …. 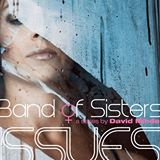 November sees the release of an ambitious new album from a team of female solo singers who are collectively, BAND OF SISTERS. Their album is called ‘Issues’ and, as the title suggests, the songs on the set explore all kinds of topics that directly affect women.

Amongst the subjects covered on the long player are friendship, growing older, addiction, fragility, loss, appearance, religion, loneliness, bullying, children, depression, and looking for Mr Right. Sounds heavy? Well, in truth the music is refreshingly optimistic and “up” and delivered across a number of musical genres – pop, folk, country, blues and soul. Indeed the biggest “name” artist is soulstress P P Arnold. Her song is the old school soul-flavoured ‘Beautiful Song’. The veteran singer has included it because though she freely admits that throughout her time in the business she’s been ripped off by managers, labels and associates she can still feel grateful for the good friends she has and the beauty of the world around her.

The album’s other big soul tune is ‘Don’t Mess With Me’ from the feisty Jacqui Michaels. The theme of her song is strength…. though the tune’s a fun one, the message is clear – just don’t take Jacqui for granted!

Other artists on the album include – Mim Grey, Miriam Stockley, Leigh Matty and Tessa Niles while the whole package has been out together by British songwriter/producer/musician David Mindel. The album will be officially launched at the BBC Club, Great Portland Street, London on Wednesday October 9th. In the meantime find out more @ www.bandofsisters.eu