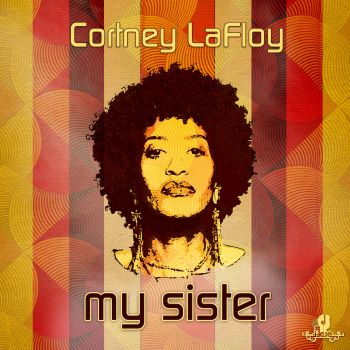 CORTNEY LAFLOY is a singer/songwriter  from the suburbs of Chicago but is currently a resident of Atlanta. She cites her influences as Miles Davis, John Coltrane, Sarah Vaughn and Billie Holiday and Nancy Wilson and she debuted in 2014 with ‘Dance 4 U’- something of an anthem in its Terry Hunter mix.

Ms LaFloy’s latest release is ‘My Sister’ which she describes as “a heartfelt song that celebrates female friendship and sisterhood”. The producer is Daz I Kue (former member of the pioneering broken beat collective, Bugz In The Attic) and between them they concoct an intriguing sound that dives deep into spiritual house territory.

The release comes in two extra  mixes – one courtesy of “Bruk” (a Daz I Kue alter ego), the other from Atlanta’s DJ Applejac which offers a distinct Afrobeat beat vibe.

‘My Sister’ will be released on Traxsource promo April 30th / Full release May 17th, 2021 on I-Kue Recordings.