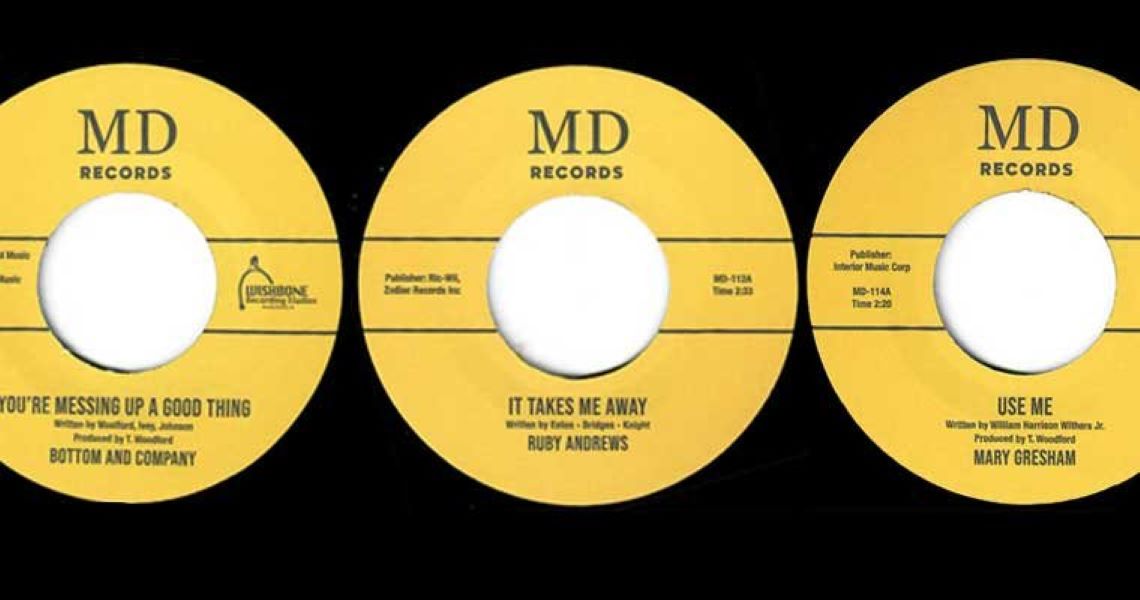 MD RECORDS is an indie, UK, boutique, vinyl-issuing soul label pledged to “bringing forward great music at great prices”. They’ve been around since 2017 and since then the team has issued a slew of classic, lost soul – most never issued on vinyl before. The original MD founders, Mark and Des (hence the label name!) say that their label is “following in the footsteps of great Record Labels that issued some of the best music in the world.” Get the flavour of where MD Records is coming from via their newest releases – a fab trio of collectable 7”s featuring tracks from RUBY ANDREWS, MARY GRESHAM and BOTTOM AND COMPANY.

The Ruby Andrews single pairs ‘It Takes Me Away’ with ‘You’re My Life’. Ruby recorded the former for the Zodiac label but never felt it strong enough for release. Since then, it’s acquired notoriety, so MD have licensed it for release  but because the recording was never mastered,  they apologise for the sound quality… sounds good to me though! ‘You’re My Life’ is another previously unissued track – a sold, catchy mid-tempo groove.

Ruby Andrews is a reasonably well-known “name”, chiefly through her hit ‘Casanova’. Mary Gresham is possibly a little less known – but she is a doyenne of Southern soul and her MD release features ‘Use Me’ with ‘Nobody’s Gonna Turn Me Against You ‘on the flip. Both feature powerhouse vocals over moody Southern soul grooves. We believe that Mary is still performing.

Most soul folk know Bottom and Company via their Motown work, but their new MD outing emanates from Terry Woodford and Clayton Ivey’s Wishbone production company. The A side is their previously unissued version of ‘You’re Messing Up A Good Thing’ – best known in versions by Bobby Sheen, Bobby Womack and John Edwards. The B side is a different affair –  a  JJ Boyce song, ‘I’m Sorry’ delivered in classic  soul group harmony style. Like the Mary Gresham and the Ruby Andrews, it’s a quality release – aimed straight at soul connoisseurs. Find out more @ www.mdrecords.co.uk