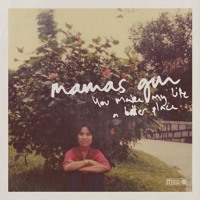 Any band that shares its name with an Erykah Badu album can’t be all bad and as we discovered when blue-eyed soulsters MAMAS GUN debuted back in 2009 they were really rather good. Their album ‘Routes To Riches’ contained all kinds of gems – none more sparkling that the gorgeous ballad ‘Pots Of Gold’. On it, main man, Andy Platts channelled a wonderful classic soul falsetto and the tune remains a soft soul classic.

Since then, we’ve followed the band’s progress with real interest and are delighted to learn that guys are releasing a new long player on May 18th. The album’s called ‘Golden Days’ and previews reveal that the ten tracker is a real corker! That soulful quality is apparent on the new single – just out as a taster. The cut is a wonderful ‘You Make The World A Better Place’… gentle and persuasive with another convincing vocal from Platts.

To tie in with the album release Mama’s Gun have also announced a four date UK tour. The itinerary is…..

(full details from the venues, of course)