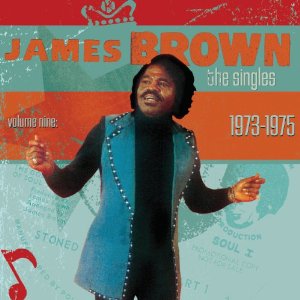 Hip-O Select have just released the ninth volume in their epic cataloguing of JAMES BROWN’S singles output. This new 35 track double CD, covers the years 1973- 1975 and the music includes ‘The Payback’, ‘Stoned To The Bone’ and ‘Funky President’, which could well be the most sampled tune of all time!

The album also features music from LYN COLLINS, and FRED WESLEY and the JBs as well as a smattering of cuts that, though scheduled as singles were never officially issued, like ‘I Got A Good Thing’ which is an early version of ‘Stoned To The Bone’. BROWN collectors will be delighted that the duet with LYN COLLINS, ‘Let It Be Me’ is also here. BROWN had previously recorded the old EVERLY BROTHERS’ song in 1970, but here he imbues it with the Latin rhythms that were fascinating him at the time. Equally intriguing is the B-side of that single –a quirky version of the IMPRESSIONS’ ‘It’s All Right’ – included – naturally.

The album comes complete with a deluxe booklet, full of evocative archive pictures, full track annotations and a thoughtful essay from ALAN LEEDS – a BROWN staffer who supplied the bulk of the pictures too. As ever Hip-O Select show the way in how reissues should be handled!

JAMES BROWN; ‘THE SINGLES, VOLUME 9’ is released on November 1st.