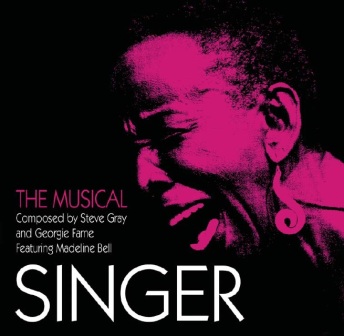 Back in 1984 that doyen of the UK soul and jazz circuit, GEORGIE FAME did some work with composer and arranger Steve Gray for Dutch radio. They collaborated with the Metropole Orchestra and Dutch entertainer Edwin Rutten and the show was such a success that the trio agreed to work together again on some original material.

That idea came to fruition the very next year when Georgie and Steve created a 13 song musical piece that would tell the story of an aspiring female jazz singer. The Dutch team thought the idea was excellent and the show was given the green light. When it came to choosing a singer to lead the show Georgie and Steve knew exactly who they wanted…. the great US soul, jazz and gospel diva, Madeleine Bell – who, long time domiciled in the UK, was a regular Fame collaborator.

The final piece was simply called ‘Singer’ and was performed at the Dutch radio hub of Hilversum with a 60 piece orchestra and 30 person choir backing Bell and Fame – who took the part of the narrator.

The “singer’s” story (told through the songs) begins in a small town down in the deepest south, where she sings Gospel with a passion. She’s tempted by secular music and makes some bad decisions in her relationships but eventually ends up in the city where she becomes a star on the back of novelty pop songs, though in her heart she loves soul, jazz and gospel. Her inherent unhappiness leads to more bad decisions and eventually her career is in her tatters but, cleverly Fame and Gray leave the story without an ending. The final songs – ‘From Now On’ and ‘The Game Of Life’ (reprised from the start) are ambiguous but the inference is that our girl doesn’t quite make it.

In between songs like ‘Small Town’, ‘The Blues And Me’, ‘Where Do You Go From Here’ move the story on with a real precision while ‘That’s How Hit Records Are Made (The Crap Song)’ is a wry observation of the music biz. Throughout, Georgie and Madeleine are in great form while the music veers from sweet pop to swinging jazz and committed soul.

Little wonder the original show was such a huge success. In 2004 the whole team gave a repeat performance at Tilburg in Holland with Dutch radio recording the whole show. Now ten years later Proper Records are releasing that recording on CD. Simply titled ‘The Musical…. Singer’ it features all the songs while the liner notes are provided by Georgie Fame himself, offering a unique insight into the process that created the piece. Georgie, by the way, is currently recovering from a severe bout of pneumonia. We @ SJF, of course, wish him well and heartily recommend investigating this – his “lost” musical ‘The Singer’.