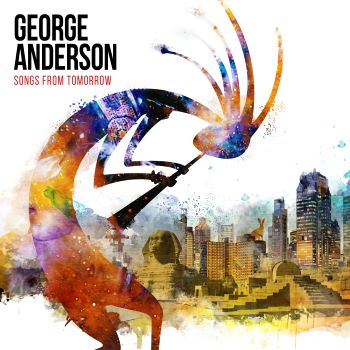 GEORGE ANDERSON is the bass player with smooth jazz veterans Shakatak, but he also enjoys his own successful solo career. Soul connoisseurs will fondly remember his versions of George Duke’s ‘Brazilian Love Affair’ and Luther Vandross’ ‘Never Too Much’ while his own ‘Back In The Day’ from his ‘Expressions’ long player became a modern soul favourite.

Last November George hit us with the single ‘Let’s Celebrate Life’ – a jazzy, funky, soulful workout that featured vocalist Joyce San Mateo – a regular collaborator with Tom Browne. So, little wonder the cut had a feel of ‘Funkin’ For Jamaica’. Then came a big “Retro” mix which was tough and feisty, big and brash, with George’s booming bass lines drawing comparison with maestro Marcus Miller.

We were told that ‘Let’s Celebrate Life’ was the herald for a new GA long player and now that very album, ‘Songs From Tomorrow’ will be amongst us from February 26th. The lengthy 15 tracker was recorded during lockdown and to help him deliver, George drafted in some top names including Sean Freeman (Level 42) Sid Gauld (Incognito) Lian Carroll, Noel McCalla and Debby Bracknell, Joyce San Mateo and Holland’s Jerome Hol. Together they’ve crafted a varied and satisfying album that offers all kinds of flavours – modern soul, jazzy instrumentals and gentle ambient chillers and it’s the first collection that I’ve come across that directly references the pandemic and all the havoc it’s created.

‘Songs From Tomorrow’, you see, opens with a massive musical onslaught simply called ‘Lockdown’. Who’d have thought 12 months ago we’d be being encouraged to get “our groove on in the lockdown”. Indeed, would we have known what a lockdown actually was? Similarly, who’d have believed that face masks would become de rigueur? And here Anderson delivers his own ‘Masks’ – an ethereal, building, almost ambient, cinematic and complex instrumental. But the track that really captures the zeitgeist is the self-explanatory ‘What The Hell 2020’; a big production, Anderson and his cohorts throw everything into the mix.

Elsewhere, the modern soul crowd could do worse than checkout the groove heavy ‘Love Makes U Feel The Pain’ while Stevie Wonder fans will be intrigued by George’s cover of ‘Higher Ground.’ There are some sweet ballads too … ‘I Would Give U Everything’ is the sweetest and most soulful. Factor in plenty of jazzy instrumentals (try ‘Teen Town’) and you have an album that is surprisingly varied from a marquee name that is a bassist. On ‘Songs From Tomorrow’ George Anderson and his bass is just one of a tight, coherent team. Yes, he’s the leader (his burbling bass dominates on ‘Donna Lee’), but this is a great team effort and it’s good to go from February 26th.