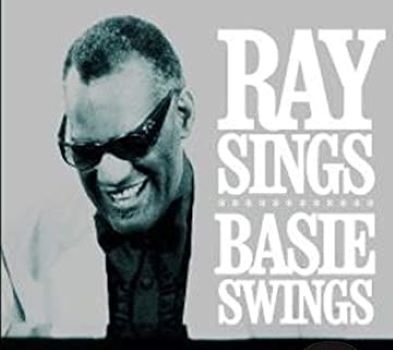 Back in 2006 the late RAY CHARLES’ revitalized Tangerine Records issued an album that paired the iconic singer with the equally iconic COUNT BASIE BAND. The album  was ‘Ray Sings , Basie Swings’ and it was a fitting tribute to two true black music giants.

That the album was ever released is a remarkable story. In 2005, the then Concord Records head John Burk found a reel of tape simply labelled ‘Ray/Basie’ in the Tangerine archive. It sounded like a match made in heaven but what the tapes actually  were had Charles and Basie playing separately during concerts performed in Germany and England in the 70s. Moreover, the sound quality was really poor with only Ray’s voice up in the mix.

Cutting to the chase, using the latest tech, Burk had the Ray Charles tape cleaned and remastered and then commissioned the then  current Count Basie Orchestra to record the backing tracks and he then married  the two together. Sounds easy – but it took months of patient editing to achieve a quality that was marketable.

The subsequent 12 tracker, released in 2006, was critically acclaimed and little wonder. Uncle Ray was at the top of his game, working through a varied repertoire that reflected his storied career. There are rousing  version of ‘Busted’, ‘Let The Good Times Roll’ and a wonderful new arrangement of ‘I Can’t Stop Loving You’. Poignancy comes via ‘Cryin’ Time’ and  a cover of the Beatles ‘ ‘Long And Winding Road’ while   the album ends with Ray’s (almost) signature song  ‘Georgia On My Mind’.

To say that the Basie Band swings as only it can would be an understatement. In full flow there are fewer bigger, better soulful sounds while the specially recruited Raelettes offer wonderful support throughout. If I tell you that these new “Raelettes” were  marshalled by, wait for it, Patti Austin, you’ll know we’re talking session royalty. Amongst the other girls are the Perry Sisters, Valerie Pinkerton and Lynne Fiddmont!

The “transformative mashup” that is  ‘Ray Sings , Basie Swings’ has just been re-released  and is available on all streaming services for the first time in over a decade, as well as on CD and in a double-vinyl package.