SINATRA AND JOBIM…. ONE MORE TIME 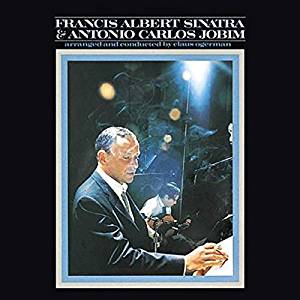 On release the album spent 28 weeks on the chart and now, to commemorate its 50th anniversary, the set wins a re-release via UME. So in re-mastered glory you can enjoy again wonderful versions of ‘The Girl From Ipanema’, ‘Dindi’, ‘Quiet Nights Of Quiet Stars and more. Sinatra is, well, Sinatra – caressing the familiar lyrics with respect and sensitivity. Indeed he’s said to have remarked after the sessions: “I haven’t sung so soft since had laryngitis’!

Sinatra fans will, I’m sure, already have the album but to tempt them, this reissue features two bonus cuts – a live medley of ‘Ipanema’/ ‘Quiet Nights’/ ‘Change Partners’/ ‘I Concentrate On You’ taken from a TV special and a previously unreleased studio session of ‘Ipanema’ that clocks in at over 11 minutes.

The reissue of ‘Francis Albert Sinatra And Antonio Carlos Jobim’ comes in both CD and digital formats and is also available on 180 gram vinyl LP – with a limited number pressed up in blue.