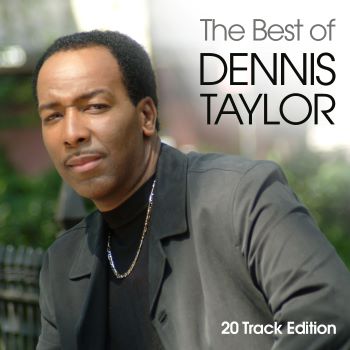 Back in the early 2000s New Jersey vocalist DENNIS TAYLOR was everywhere. His music dominated the soul charts and no self-respecting modern soul DJ dared not play out a couple of his tunes during a set!

On the back of Domes 30th Anniversary celebrations, Dennis and his music are being rediscovered. So far this  year we’ve enjoyed three fab mixes of a trio of his classics – the Nigel Lowis tweaks of ‘In The Mood’ and ‘It’s Over’ and the Drizabone mix of ‘Smile’.

Now to round things up somewhat, Dome Records have just released a re-tooled version of Dennis’ 2004 ‘Best Of…’set. That one was a 16 tracker; the new set, ‘The Best Of Dennis Taylor’ offers a more generous 20. So, of course, there is plenty of duplication. Indeed there are 12 inclusions from the 2004 album but it’s so good to have things like Mr T’s versions of Anita Baker’s ‘Angel’, Patti LaBelle’s’ ‘Love Need & Want You’ and the  Rahsaan Patterson composed ‘Want’ again.

The new inclusions are the three previous released mixes (see above), a new Nigel Lowis mix of ‘Here I Am’  alongside the almost funky ‘Out Of Control’ , ‘You Know Just When’, the original of ‘It’s Over’ and a stunning version of Dionne Warwick’s ‘I’ll Never Love This Way Again’ which proves that good old DT could do much more than just provide soul for your soles!

The 20 track edition of ‘The Best Of Dennis Taylor’ is out now via Dome.