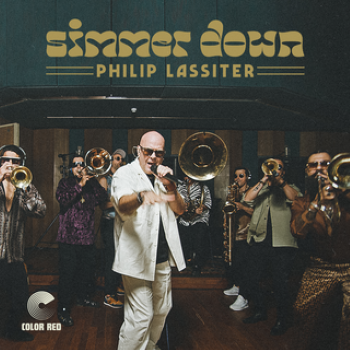 Prince fans will know all about horn player/arranger PHILIP LASSITER. He worked with the Purple One   for three years, playing out and arranging all the  horn parts for the New Power Generation. Since then he formed his own band, Philthy, where he developed a sound that was mid-way between his old boss and soul vets, EWF.  He’s released four solo albums and arranged horns for people like Kirk Franklin, Ariana Grande, Mariah Carey, Kelly Rowland, Jill Scott, Fred Hammond, Al Jarreau, Anthony Hamilton, Ledisi, Chris Cornell and Timbaland. Oh, and by the way, he has 11 Grammy Arranging Awards!

Hear where Philip’s at right now via his  latest single – a big brash, in your face, horn fuelled, ‘Simmer Down’ . On the cut, Lassiter leads a 24-piece team who  create a  funk/Latin hybrid with a jazzy undertow, There’s an urgency to proceedings – the track was recorded live with 8 horns and a 6-piece vocal ensemble. Lassiter wrote ‘Simmer Down’ with Brett Nolan and the song is an anthem for “self-empowerment and for staying true to yourself and resisting the urge to be confined into a proverbial box whether it is creating music or walking your own path in life.” However, it’s the track’s big sound that grabs you. It’s out now via Color Red Music.