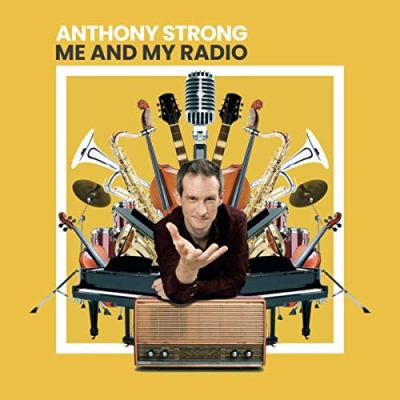 On April 19th, acclaimed English jazz singer, ANTHONY STRONG, unveils his keenly-awaited fourth album,  ‘Me And My Radio,’ which is released via Guaranteed! Records.

The new 12-song set finds the svelte-voiced 34-year-old Croydon-born crooner and pianist putting his own inimitable spin on a wide-ranging collection of imaginatively-arranged and well-produced tunes. As well as interpreting jazz standards – such as ‘Ain’t Misbehavin’,’ ‘Anything Goes,’ and ‘Smile’ – Strong raps his smooth, soulful tonsils around Stevie Wonder’s ‘My Cherie Amour,’ and offers up a tremendous version of UK soul group The Real Thing’s  ‘You To Me Are Everything.’  The singer also delivers an impressive self-penned number called ‘Gamblin’ Man Blues’ – rendered as an energetic big band number – and covers ‘Sixteen Tons,’ the latter a Merle Travis song written in 1946. It has been covered by everyone from Johnny Cash to Tom Jones but such is Strong’s talent that he is able to make the song indisputably his own.

Defined by a sense of cool sophistication, ‘Me & My Radio,’ is another fascinating chapter in Strong’s career and looks certain to build on the success of his previous albums ‘Stepping Out’ and ‘On A Clear Day.’

Anthony Strong’s ‘Me & My Radio’ Is Released On 19 April By Guaranteed! Records