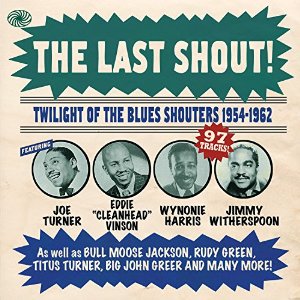 ‘THE LAST SHOUT’ is the latest archive release from specialist oldies label Fantastic Voyage. Sub-titled ‘Twilight Of The Blues Shouters’, the 3CD, 97 track album focuses on the legendary, so-called “Blues Shouters” (like Joe Turner and Jimmy Witherspoon) who plied their trade in the Juke Joints and Speakeasies of the States in the years following World War II. Their music was quickly labelled R&B by the media and music students will tell you that the sound eventually became one of the key components in 60s soul.

The biggest names on the album include Joe Turner, Wynonie Harris, Jimmy Witherspoon and Eddie ‘Cleanhead’ Vinson. Soul collectors, though, will recognize lots of other names too – notably the great Titus Turner who offers a remarkable version of ‘Have Mercy Baby’ and a great take on ‘Get On The Right Track Baby’. Other featured artists familiar to the soul crowd are Smiley Lewis, Ivory Joe Hunter, Roy Brown, Jimmy Liggins and Roy Milton. Lesser luminaries include the wonderfully-named Crown Prince Waterford, Stomp Gordon, Little Caesar and H-Bomb Ferguson whose throwaway ‘No Sackie Sack’ is every bit as relevant to the genre as the input from the big names.

The album comes with a 20 page, fully illustrated booklet courtesy of R&B specialist Dave Penny, but as someone much more eloquent than me said “it’s what’s in the grooves that counts”…. and here you have some magnificent, rustic, honest, passionate music that magically combines the passion of the blues with the urgency of rock and roll; not Soul – but soulful!