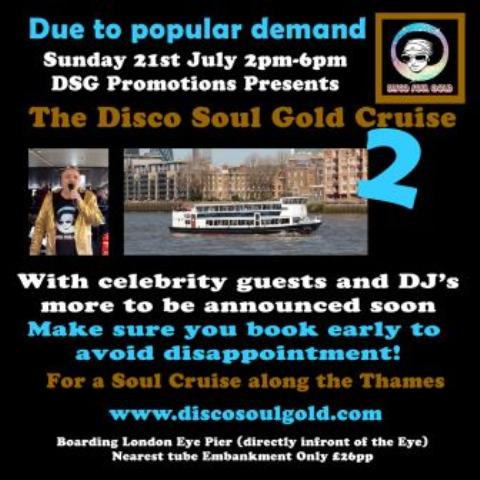 A week or two back, DSG RECORDS hosted their first Disco Soul Cruise down old Father Tames. The event was a huge success and so the nice DSG gang have set up a second soul sailing. Episode two will happen on Sunday July 21 Sunday 2 pm – 6 Pm.

Like the first soul cruise, this one will feature plenty of guests including – flying over from America and singing live Marc Staggers!

In the meantime, the compilation album that was launched on the first cruise- ‘Disco Soul Gold Volume 2′ continues to top charts with many of the included tunes winning maximum airplay and club exposure – notably the new mix of Soulutions’ ‘Philly Line’. The song was re-vocalised and re-produced to give it a completely new Philly/Nigel Lowis vibed up version for 2019. Also winning plenty of attention is ‘The Soul City People’ from -Peter Symporien, Marc Staggers, Roger Samuels (fresh from The Voice), Hannah White, Jimmy Gallagher and Nigel Lowis … “the Soul City People”! While a little out of left field the Nigel Lowis mix of the gospel song of ‘Love For Me’ from Fiona Yorke is also getting bags of attention.

Find out more about the cruise via the DSG web site.