SHEILA E – NEW ALBUM DUE IN NOVEMBER…AND A UK GIG! 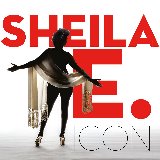 Playing the drums was never deemed a glamorous occupation until a certain Ms. SHEILA E came along on her high heels in the 1980s and with her flamboyant presentation – allied to her dropping technical virtuosity – transformed many people’s perception of what constituted a ‘tub thumper.’ A cohort of Prince in the 1980s, she scored some solo hits helmed by the Purple One, including ‘The Glamorous Life,’ ‘The Belle Of St. Mark’ and ‘A Love Bizarre.’

It’s been over a decade since her last solo album, ‘Heaven,’ and now, after a lengthy hiatus, she returns with a new long player, ‘Icon,’ which is released by Moosicus Records on November 25th. Two days prior to that on November 23rd, Ms Escovedo plays a rare, one-off UK gig at Under The Bridge in London.

‘Icon‘ is far removed from the smooth jazz vibe of her ’90s and noughties albums and a return to the energetic pop-funk-Latin vibe of her ’80s work.

Look out for a full review soon at SJF – and with any luck, a full interview too!