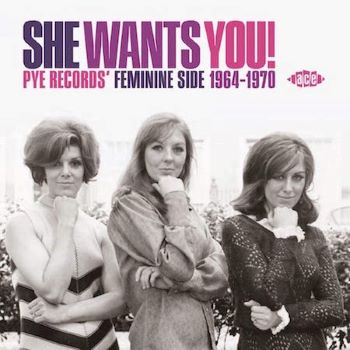 ‘She Wants You’ is the latest Ace Records compilation in their series that focuses on the feminine side of Brit pop in the 60s. This new collection digs into the catalogue of Pye  Records who along with EMI, Decca and Phillips dominated the UK music industry in the 60s.

Pye’s biggest female star was Petula Clarke and it’s her version of the Beatle’s ‘Rain’ that kicks off proceedings here. The track was produced by Tony Hatch – Pye’s main producer/A & R man throughout  the 60s. He was also married to singer Jackie Trent and, naturally, she has a track on this completion. It’s ‘Hollywood’ – a Tony Hatch song which betrays his ambition to be the UK’s Burt Bacharach… he  almost succeeded!

Collectors of soul covers will enjoy Billie Davis’ version of Gladys Knight’s ‘Just Walk In My Shoes’ and Margo and the Marvettes’ cover of Ben E King’s ‘Seven Letters’ while Northern fans have Lorraine Silver’s ‘Lost Summer Love’ to add to their collections  if they don’t already have it that is. If you don’t know it, it’s one of those songs that perfectly suits the fast Northern tempo, but ”soul”? I’m not so sure.

Lorraine is one of a number of 60s wannabees featured across the 25 tracker. She did though have some impact in a belated, roundabout way but other featurd ladies like like Sandra Barry, Peanut, The Feminine Touch, Mally Page, Glenda Collins  and Maxine Darren don’t even merit footnotes in 60s music histories. Those featured on the album who enjoyed some notoriety include Sandie Shaw, Dana Gillespie, Julie Grant and Anita Harris.

SHE WANTS YOU out now on ACE RECORDS