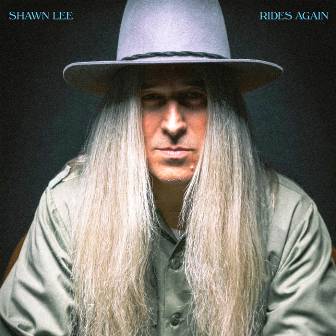 SHAWN LEE is a proper music chameleon. The 55 year old Wichita-born artist/multi instrumentalist is also a noted producer and award-winning video game, TV and film composer. Of mixed ancestry (his mother enjoys Lebanese and American Indian ancestry and his father is Irish American) and now based in London, he’s recorded solo and as a member of various bands across different genres. Amongst his various recorded incarnations are Shawn Lee’s Ping Pong Orchestra and Young Gun Silver Fox (a collaboration with Andy Platts of Mamas Gun). Young Gun Silver Fox’s 2108 LP ‘AM Waves’ was well received by many in the soul community.

Shawn has just released a brand new album… ‘Rides Again’. The ten tracker is his first vocal/songwriter solo set since 2005’s ‘Harmonium’ and he describes it as “a personal journey into the world of soul-inspired country music”. And yes, that’s a fair description. Lyrically the songs describe Lee’s odyssey (real or imagined)… most notably on things like ‘Wichita’, ‘Kansa City Summer’ and ‘Farmer Brown’. Sonically, though there is a blue-eyed soul undertow, the overriding flavours are modern country music and Americana. In plenty of places it reminds me of Bruce Springsteen’s last album…. ‘Western Stars’. Like that one there’s plenty of big sky/wide prairie imagery. You’ll also hear flavours of Glen Campbell, Jimmy Webb, and Neil Young – even Brian Wilson. Eclectic it sure is… there’s even an atmospheric instrumental, ‘Joyland’.

SHAWN LEE: ‘Rides Again’ is out now on Legere Records.