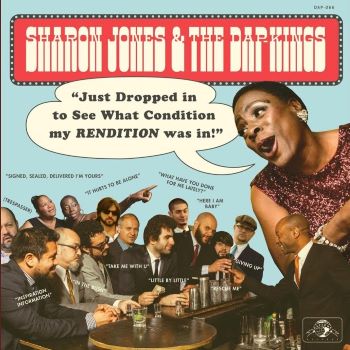 SHARON JONES died from pancreatic cancer in 2016. She was relatively young – just 60 and had finally established herself as a major soul player. Helping to keep the Sharon Jones brand out there, Daptone have been diligently and digitally releasing plenty of Sharon’s old material – most of it previously unreleased – mainly outtakes and cuts rejected for inclusion in her past album projects. Now all those tracks have been collected together onto one CD … ‘Just Dropped In (To See What Condition My Rendition Was In)’.

And that title gives you a clue as to the content of the collection. Yes, this baker’s dozen of Jones tracks is a covers album – an assemblage of some very well-known songs peppered with a selection that aren’t that well known – – but all given the distinctive Sharon Jones and the Dap Kings treatment. The most familiar tunes here have to be Stevie Wonder’s ‘Signed, Sealed, Delivered’, Dusty Springfield’s ‘Little By Little’ and Fontella Bass’ ‘Rescue Me’. In truth, here, the Daptone crew don’t stray too far from the original arrangement, but, as you’d expect, they all sound a little “tougher”. Familiar too is Mystique’s disco anthem ‘In The Bush’.  A surprise maybe that Sharon Jones would choose to cover it and on it she and the band keep the frantic pace but lose some of the glitter ball polish. Oddly, it works. Another surprise maybe is a cover of the little known Marvelettes’ song ‘Here I Am Baby’ where the Motown original is transformed into a sparse New Orleans funk workout.

The other songs given the Sharon Jones treatment are First Edition’s ‘Just Dropped In To See What Condition My Condition Was In’ (here Jones tracks Bettye Lavette’s 1968 version), Janet Jackson’s’ ‘What Have I Done To Deserve This’, Prince’s ‘Take Me With U’, Woody Guthrie’s folk classic ‘This Land Is My Land’, Shugie Otis’ ‘Inspiration, Information’, the early Bob Marley song ‘It Hurts To Be Alone’,  the Bad Medicine instrumental ‘Trespasser and Van McCoy’s ‘Giving Up’. That last one, originally recorded by the Ad Libs, has been recorded by plenty of soul luminaries – notably Gladys Knight and Donny Hathaway. Here Ms Jones gives both of ‘em a run for their monies – proving, if indeed proof was needed, that dear Sharon Jones was indeed a major soul contender!

SHARON JONES AND THE DAP KINGS; ‘Just Dropped In (To See What Condition My Rendition Was In)’. Out now on Daptone.