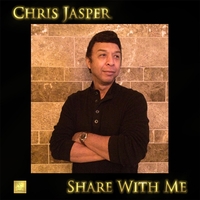 Sometime Isley Brother, CHRIS JASPER is currently working on a brand new album… the follow up to ‘The One’.

The new long player is set for release in the summer but in the meantime, Chris is all set to release the album’s title track – a gentle, insinuating builder called ‘Share With Me’. The song boasts a lovely hook over which Chris’ vocal seems to float in best Isley Brothers tradition…hardly surprising given his CV!

The single will be released on April 1st on Gold City Records and you can learn more @ www.chrisjasper.com