SHAKE IT UP BABY! 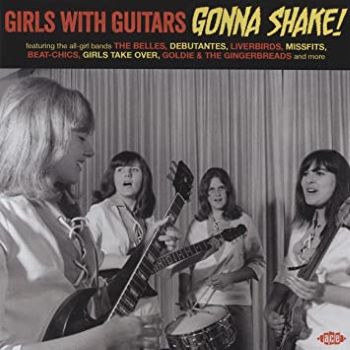 Ace Records continue their excellent ‘GIRLS WITH GUITARS’ series with a 25 track, ‘Gonna Shake!’ The idea behind the series, of course,  is to establish that despite what music histories suggest there was an awful lot more to girl groups than seemingly coy (OK, the Ronettes were an exception) trios/quartets of attractively coiffed and prettily dressed girls warbling sweet pop and soul ditties. From the 60s onwards there was a hard core of music-loving women who believed that if boys can form guitar groups, well, so can they! Sadly these pioneering women  never got much coverage (it was still a male dominated era and the music biz reflected that) and few (if any) enjoyed success but this Ace series is at last putting the record straight and collectors will find plenty of gems in this new collection.

Perhaps the best known band on this album are Goldie and the Gingerbreads. Led by Genya “Goldie” Zelkowitz, they enjoyed a UK hit in 1965 with the Alan Price-produced ‘Can’t You Hear My Heartbeat’. Despite that success, though, they remained on the fringes; another “cult” band. Their contribution here is a raucous   version of Ray Charles’ ‘What Kind Of Man Are You’.  And that hints at where most of these girl bands were coming from. Like their male counterparts, their repertoires were filled with covers of rock and roll, blues and embryonic soul material . So here enjoy “standards” like  ‘Dimples’ from the Missfits, ‘High Heel Sneakers’ from Girls Take Over, ‘Got My Mojo Working’ from Joyce Harris and the Daylighters, ‘Little Latin Lupe Lu’ from the Debutantes, ‘Diddley Daddy’ from Scousers, the Liverbirds and a lot more.

For obvious reasons, the original material apes the then fashionable pop sounds – notably Merseybeat. Try the Chymes ‘Quite A Reputation’ or the Bootles’ (a US band named for a Liverpool district) ‘Never Till Now’. Then there’s the energized ‘Really Gonna Shake’ from Sandra Barry and  the Boys (for which the collection is named) and a tremendous ‘Melvin’ from Florida band The Belles. That one will sound familiar – it’s a re-write of Van Morrison/Them’s ‘Gloria’!

As ever with Ace releases, you get  a wonderful, 24-page booklet containing a picture-packed 4,000-word track commentary by series compiler Mick Patrick. Out now!