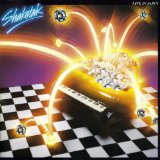 SHAKATAK are the ultimate “cult band”. Because of their hits they are a “known name” in the mainstream but they have a large and loyal (almost underground) fan base who love the outfit for their musicality and consistency. That fan base are serious collectors of the band’s material and they’ll be delighted to learn than one of the group’s most in-demand albums has just won first-time CD re-issue.

Shakatak were – indeed still are- “Big In Japan”. Their debut album secured top slot on the Japanese charts and they went on to win the coveted Silver Award in the Tokyo International Song Festival. Since then Japanese fans have been amongst the group’s most loyal fans ensuring that they were awarded the Japanese Grammy for Best International Instrumental Album six years running.

To satisfy the Japanese market, Shakatak recorded a number of exclusive Japanese albums. One was a 1983 live set that was recorded at Tokyo’s Nakano Sun Plaza Hall. The double LP featured many of the group’s early hits including ‘Streetwalking’, ‘Night Birds’ and ‘Easier Said Than Done’ alongside experimental piano and bass solos. The album was only ever available in Japan and has never been reissued on CD –till now

Secret Records will be making ‘SHAKATAK – LIVE IN JAPAN’ available from March 3rd. It will come as a double CD and as a 2 LP vinyl set and you can find out more @ www.seceretrecordslimited.com