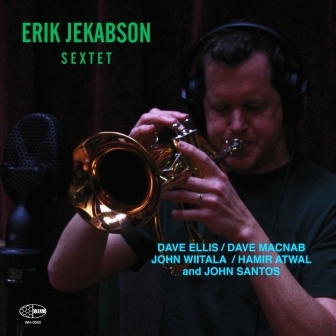 ERIK JEKABSON is a jazz trumpeter who works in and around San Francisco. With a masters degree from that city’s famed music conservatory, he’s worked with people like Kamsai Washington and toured alongside John Mayer as well as guesting on albums and sessions within the Bay area.

Released on Wide Hive Records and produced by Gregory Howe, Erik tells us that the nine tracker was inspired by places, events, moods and ideas around him at the time of recording in the legendary Berkeley Fantasy Studios. Those place and moods are maybe best typified by the solemn ‘The Hills Of Santa Cruz’ (just a whiff of Miles Davis’ version of ‘Concerto De Aranjuez’ about this one). The opening ‘San Pablo Avenue’ is another tune defined by location… the rich texture suggesting the red stop lights and blurred lines of rush hour traffic. Elsewhere ‘Gentle Wave’ take us to Pacific shores while on the closing ‘Medjool’, the inspiration seems even more exotic.

ERIK JEKABSON; SEXTET is out now on Wide Hive Records.