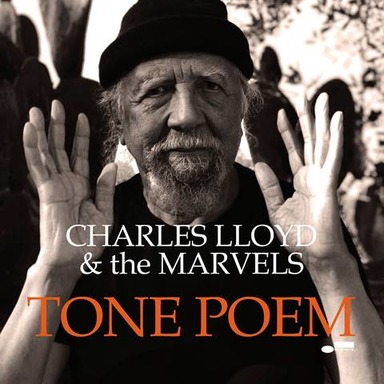 This is Lloyd’s third album with the appositely named Marvels, a band comprised of guitar maven Bill Frisell – a legend in his own right – together with pedal steel guitar maestro Greg Leisz, bassist Reuben Rogers on bass, and drummer Eric Harland on drums.  Lloyd’s supergroup debuted in 2017 and immediately impressed with their coalescence of disparate musical strands, seamlessly blending jazz with blues, Americana, country and rock and arriving at a unique, sui generis sound.

For the spiritually enlightened Lloyd,  now 83, music is an intoxicating brew that can elevate humankind to a higher plane of consciousness. “You must have your elixir, and the elixir is in sound and tone,” he explains.  “When you’re at the feet of the Universe, she will always bless and take care of us. It’s not politicians we need but sages. Many have their hand out for something, but I try to let my heart be filled so I want for nothing. I live in awe, drunk with the music.”

The new album, his sixth for Blue Note since he joined the label in 2015, is preceded by the single ‘Ramblin’,’ and is the first of the label’s new releases  to be issued in the Tone Poet Audiophile Vinyl Series.