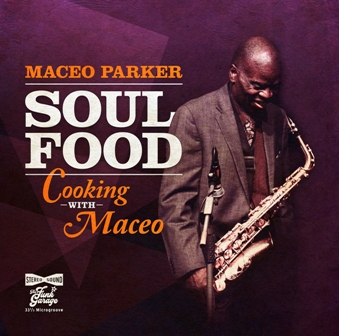 Back in March it was announced that the MASCOT label group was launching another subsidiary imprint…. THE FUNK GARAGE.  We were told that Bootsy Collins would be playing a leading role in the new company and that the label’s first signing is Maceo Parker.

Mascot/Funk Garage have now announced that things are good to go with the release, at the end of June, of ‘Soul Food – Cooking with Maceo’ from the legendary sax man. We believe that  the long player is Parker’s 16th collection as leader and features some Maceo originals alongside a slew of covers of soul and funk classics like The Meters ‘Just Kissed My Baby’, Aretha Franklin’s ‘Rock Steady’ and  Prince’s ‘The Other Side of the Pillow’. Recorded in New Orleans, the set has been produced by Eli Wolf.