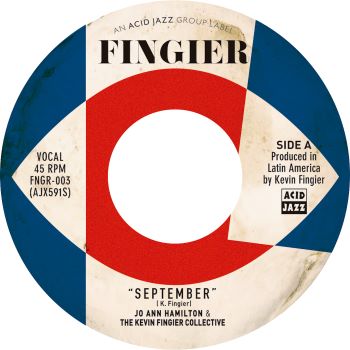 Last year we got to know something about Argentinean muso KEVIN FINGIER and his band – the eponymous COLLECTIVE. He released a well-received single that paired ‘Don’t Wanna Cry No More’ with ‘Sunglasses After Dark Part 1’. The former was a rough and tough dancer that mixed 60’s R&B, Northern soul and the fashionable Daptone sound. The tune’s featured vocalist was Northern soul legend Gerri Grainger. ‘Sunglasses’ was a Hammond-led soul-jazz affair that was repeated on his follow up, ‘Latin Dynamite’ – a proper 60’s basement club throwback.

Senor Fingier now returns to the fray with a new project fronted by Georgia-raised, gospel-reared, soul sister JO ANN HAMILTON. She’s the lady fronting Kev’s new single… ‘September’/ ‘I Love Without A Love’. The former isn’t the classic EWF tune; rather, it’s a Northern flavoured groove with a rough, tough sound and a quirky Latino undertow. The latter mines the Northern soul vein too – complete with parping brass, tight beats and a soulful vocal from Ms H.

Somebody called Richard Searling says: “Both tracks are excellent. Anything you see from this label with Kevin Fingier via the UK-based Acid Jazz Group comes highly recommended from myself”.

Not much more to say, save that the singles’ out on April 23rd via Fingier Records/Acid Jazz.