SENDING OUT SOME SOUL…. 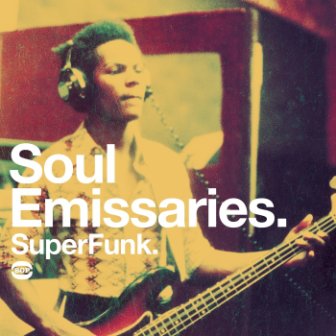 ‘SOUL EMISSARIES’ is the latest volume in Ace/BGP’s “Super Funk” series and the new 20 tracker collects together another varied selection that, this time around, offers a brand of funk that is maybe a touch more soulful. Good example is the set’s opener, ‘You Bring The Tears’ from Samson and Delilah. Released in 1972 on Polydor, the track was a Malaco production and bears all the hallmarks of that great Southern studio. Like much of the music here it’s ultra rare… the record was only issued on a promo before it totally disappeared.

Malaco is further represented by a brace of Chimneyville releases – Bill Cee’s ‘Dark Skin Woman’ and Chuck Brook’s ‘Behind Closed Doors’. Other featured artists include William Bostic, Lamont Johnson, Obrey Wilson, Raymond Parker and Mary Love. Mary, a long time soul connoisseur’s favourite, offers a feisty ‘Born To Live With Heartache’ recorded for Elco in1971. Another old favourite on the set is McKinley Mitchell. Best known for his 1962 hit ‘The Town I Live In’, Mitchell hailed from Jackson, Mississippi and though he didn’t enjoy too much success after ‘Town’ he recorded consistently. His tune on this album is a grinder called ‘Days Got Brighter’. Tough and rustic, it’s a far cry from that famous hit.

SOUL EMISSARIES… SUPER FUNK is out now on BGP Records.