SENDING OUT FORGET ME NOTS… 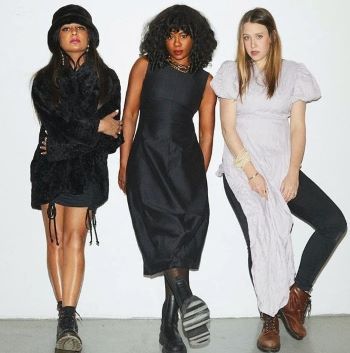 If you like your contemporary soul and funk a little quirky, may we point you to a new single  from SAY SHE SHE. The oddly named Brooklyn band is an 8 piece led by three female vocalists – Piya Malik,  Nya Gazelle Brown and Sabrina Cunningham (pictured)-  all seasoned music biz veterans.

They’ve now come together to offer a hard-to pigeon-hole ‘Forget Me Not’. Musically there’s a definite electro,  wah wah-fuelled funk undertow with  a cray flute but the vocals are something else – harmonic and meandering. Think maybe Rotary Connection meets Kate Bush!

Lyrically, ‘Forget Me Not’ is an homage to New York City’s Guerrilla Girls – an art collective that fought for  women’s rights .. and that name – Say She She? We’re told that this is a tribute to Chic – “C’est chi-chi!: It’s Chic!”… now you know!