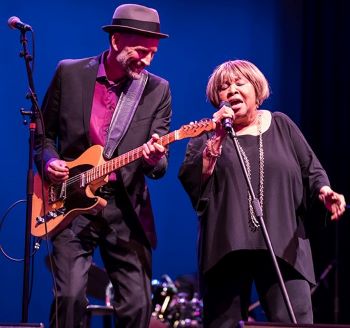 RICK HOLMSTROM is an acclaimed US guitarist. He’s worked with luminaries across genres – most notably (for us) was his stint with Booker T while he spent 13 years as Mavis Staples’ guitarist/bandleader. Indeed, he won a Grammy for his work on Ms Staples’ ‘You Are Not Alone’ album.

Holmstrom also records solo. He has 5 albums to his name and is about to unleash a new one… the 12 tracker that is ‘See The Light’.  The music was recorded during the first of the pandemic lockdowns when live work dried up. Holmstrom says: “These songs were written looking out of airplane and bus windows, or in hotel rooms at 2 am. The main thread, as I see it, is in the songs, or the stories. We’ve got a person here who’s struggling; who’s afraid to wake up to the truth; afraid they’re losing their shit; can’t find work; looking for love under a freeway overpass in San Bernardino; trying to convince a fair-haired hotel clerk to see the bright lights of Fresno; while anxiously trying to navigate an existential dystopian crisis; feeling like a loser; and an asshole; that the world is passing them by; and that they might be better off calling it quits. But in the end, a four-year-old points her finger up at the night sky and asks: ‘See that light? What’s its name and how do you know?’ It’s the child’s joyful eye that restores this guy’s hope.”

So ultimately ‘See The Light’ is an optimistic album. Sonically it veers between rock, blues, country and Americana. Some tracks are rockier than others while, of course, some are bluesier. Amongst the highlights are the county-tinged ‘Joyful Eye’ and the jaunty blues that is ‘Got To Go’. With track titles like ‘I’m An Asshole’ and ‘Losing My Shit’ you can guess that Holmstrom’s music rarely takes prisoners.