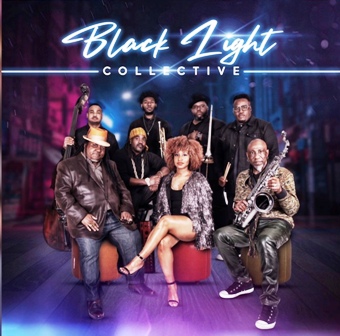 Been a while since we heard from celebrated Detroit sax man DAVE McMURRAY. I know plenty of soul folk who have a soft spot for his sprightly cover of ‘What Cha Gonna Do With My Lovin’ while more recently, he was working with Paul Randolph in the Detroit/Memphis Experience.

Right now, though, he’s heading a new Detroit ensemble THE BLACK LIGHT COLLECTIVE. He tells us that the band make music that is in “Homage to the jazz of the 60’s & 70’s, when music had groove, creativity, and a message.  Musicians had something to say and weren’t afraid to say it.  Jazz was a necessity of expression for both the artist and the listener. It’s the sound of freedom, hope, survival, fun, and the future. “

The Black Light Collective’s debut eponymous album is rightly making waves on the jazz scene with tracks being regularly rotated on the best jazz stations while the single ‘Freedom Day’ – a loose-limbed vocal married to a brassy jazz workout is turning plenty of heads too. That cut, though, is only one of many varied flavours on offer across the 11 tracker. ‘Black Light’ is classy, funky, soul-jazz; ‘Detroit Urban Radio’ is smoother altogether with a hint of the ‘Shaft’ soundtrack about it; ‘In My World’ is the LP’s big sensuous moment; while ‘2 Minute Prayer (the album closer) is led by a gorgeous trumpet passage. Focus cut though is ‘Assimilation’  which is prefaced by a short but sweet piano intro before developing into a (mainly) spoken word piece with pianist Mailk Alston handling the moving monologue which urges the Afro/American community to celebrate their achievements with real pride.

Leader McMurray says; “Detroit has always been a Mecca of jazz, rock, soul, and funk”. Here, his Detroit-raised Black Light Collective delivers all that and more.