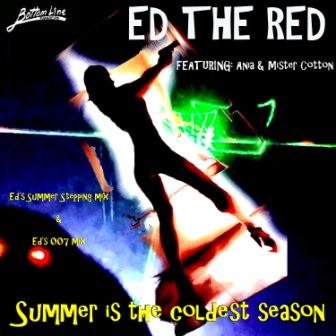 We first heard of Russian muso and Berklee Music College graduate, ED THE RED (Edward Goltsman) back in the 90s when Wizz records issued his ‘It’s Alright’. In its Love Station mix it was a big, big sound!

More recently Ed impressed us all with ‘Music Is So Wonderful’ featuring a great vocal from Alabama’s Vivian Lee. The tune was reissued last summer and it soon found its way into many a discerning DJs play out boxes.

In the meantime Big Ed has just issued a new tune that’s a little different to the dance music that is his usual dalliance. ‘Summer Is The Coldest Season’ is the track in question and though you may question the timing of the titling, you can’t argue with the tune’s dance floor potential. Put simply, it’s a great modern soul tune with tight, snappy beats and a properly soulful vocal from Ania. OK there’s a rap too (courtesy of Mister Cotton) but it’s totally organic and adds to the song’s irresistible quality. It comes in a “007” mix and a “Steppers” mix and there’s little to choose between them. Already taste-making DJs are predicting that ‘Summer Is The Coldest Season’ will quickly become a classic on both the Steppers and Modern Soul scenes.