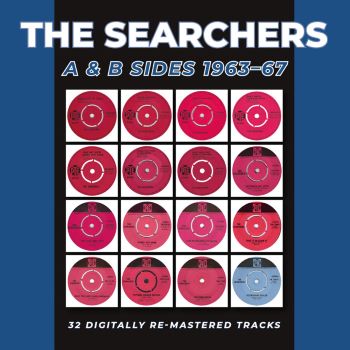 Back in the 60s THE SEARCHERS were second only to a certain band in the pantheon of Merseybeat groups. In terms of popularity and prolonged chart success only the Fabs outpaced them and just like the brand leaders, the Searchers’ repertoire (especially in the early days) was stuffed with their versions of US early soul, R&B and R&R songs. That was chiefly down to their drummer Chris Curtis who was a huge soul fan and had an uncanny ear for picking obscure US recordings for his band to reinterpret.

Hear some of those great covers on this new BGO collection which collects together all the A and B sides of the Searchers’ singles recorded for the Pye label between 1963 and 1967. The  32 tracker begins with the band’s first single (and first no. 1) – a cover of the Drifters’ ‘Sweets For My Sweet’. The other big soul covers are Jimmy Hughes’ ‘Goodbye My Love’, the Orlons’ ‘Don’t’ Throw Your Love Away’ and Barbara Lewis’ ‘Someday We’re Gonna Love Again’ .

The album, naturally, also features the Searchers’ two best known items – ‘Needles And Pins’ and ‘When You Walk in the Room;’ (both, of course, originally recorded by Jackie De Shannon). That latter in particular featured  what was to become the band’s signature, chiming 12 string Rickenbacker sound – a sound that was to influence US giants like the Byrds and Tom Petty and the Heartbreakers.