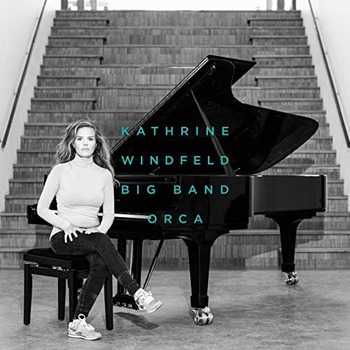 A rising star of the European jazz scene, the award-winning Danish pianist, composer and arranger, Kathrine Windfeld, is due to release her third album, ‘Orca,’ on January 15th 2021 via the Copenhagen-based Stunt label.

The marine-themed long-player follows reflects Windfeld’s lifelong fascination with the sea – she was brought up on the small Danish island of Funen – and follows in the wake of her two, well-received, previous albums: ‘Aircraft’ (2015) and ‘Latency’ (2017), both devoted to showcasing her highly expressive 16-piece big band.

This new project, recorded in June 2020, features eight new compositions by the 36-year-old Dane; rich, evocative seascapes which like the sea, are by turns tranquil and turbulent, and are vividly brought to life by the composer’s outstanding ensemble, which features alto saxophonist Magnus Thueland, flugelhorn player, Magnus Aanestrad Oseth, and guest tenor saxophonist Gabor Bolla.