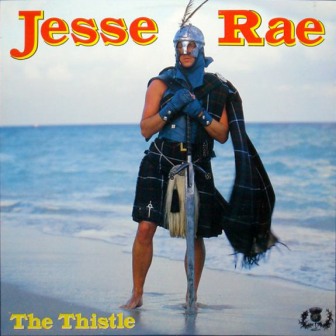 If the Glasgow Commonwealth Games has whetted your appetite for all things Caledonian, then you could do worse than investigate one of the most unique soul and funk artefacts from “North of the Border”.

The record in question is ‘The Thistle’ from Scotland’s most idiosyncratic (and unlikely) funkateer, JESSE RAE.

Rae is a Renaissance man of Scottish culture – musician, film maker, video producer and politician – and his in-demand album ‘The Thistle’ was originally released back in 1987. It’s now been reissued in a very special edition which features the original ten tracks along with 12 previously unreleased remixes and 4 cuts that have never been on CD before.

The music is essentially 80s funk with a Scottish twist and it’s never less than interesting… more so because of its back story. In the 1970s Jesse Rae was working in the USA and came into contact with Roger Troutman, Bernie Worrell and Michael Hampton of the Funkadelic/Parliament axis. Back in the UK he cut a single or two (one being released on Miami’s TK label) while his song ‘Inside Out’ became a hit for Odyssey.

Then in 1987 he recorded his debut long player, ‘The Thistle’, having secured the services of his old pal, Roger Troutman as producer and the result was as crazy and spaced out as anything to come out of the whole Funkadelic thing – crazier if only for a funked up version of ‘Scotland The Brave’!

After one more album Rae stood for election as an independent in the Scottish elections and is currently working on a movie called ‘The Flesher’.

In between he’s still making music but I doubt if anything will match the off the wall nature of ‘The Thistle’ – stuffed with hard driving electro funk, a generous garnish of Scottish culture and one great Quiet Storm moment, ‘Don’t Give Up’.

JESSE RAE’S ‘THE THISTLE’ is out now… dedicated to Roger Troutman …. it’s on Luzuli Music and you can find out more @ www.facebook.com/jesse.rae.56